This post is in English, this is my first post (here) in English, and can be the last. Sorry if there are mistakes, this isn't my mother tongue.

The model sold in France includes a TomTom Navigator 6 with French cards.

I had one that worked well until the end of 2011. Since, it seems to have some memory corruptions or it's the Windows Mobile OS which is self destroying, I don't know. I have an other similar models (I think, with the same motherboard) still functioning.

If I have some time, I will try to wipe out the Windows Mobile to put a Linux. But for now, I've opened the device.

Step one - open the case

Now, remove the 5 screws, (red dots in this picture). You need a T5 screwdriver.

Once done, hold the bottom of the boxes and push the upper to the right (like the arrow).
It's clipped, but it's the way to open it. 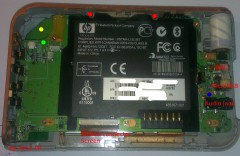 Disconnect the ribbon connector then remove the 3 screws (2 T5 - in red - and one cross - in blue).

There is no need to remove the black plastic with the text, there is nothing behind. 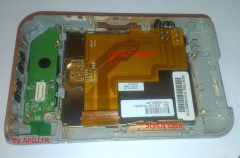 Here you see the back of the screen, and the extension card.

You can remove the extension card with the T5 screwdriver, there is two screws.

Removing the screen is more a headlock, you need to unclip the bottom with the "middle". I didn't see any screw but I saw lot of clip...

You can see where the stylus goes.

This is probably the most interesting things.

You have the connector to the extension card (J1), I didn't count but, there are many pins.

The "ROM" is the MD2433-D8G-V3Q19-X-P, it seems there is a emplacement at the left for an other memory slot, maybe used by the RX5935.
This memory have a 8Gbits (1GB) capacity. So this is not a ROM, but a NAND device, made by MSystem. I think there are (at least) two partitions, one for the operating system, one for user data. The bootloader is probably inside that.

The WM8983G is a multimedia chipset designed by Wolfson Microelectronic. It manage the jack output, the internal speaker and the mic. According to the datasheet it receive digital audio, and it can do some EQ or level adjustment before sending signals to outputs.

The TPS65020 is a power management chip. It's this component who manage the Li-Ion battery. I'm not sure, but this is probably this chip which handle the reset button.

The SIRF GSC3F is surrounded by the metal (probably to reduce interferences).

The white thing is probably the GPS antenna, there is two pin connected to the PCB, and nothing more except metal.
UPDATE (2013-08-23): I confirm, this is the GPS antenna.

I think the WiFi chip (present on other models) go the left of the SD Card reader.

Well, there is almost nothing on these extension card.

The BCM2045S dedicated to the bluetooth, and the two push buttons.

If the WiFi chip didn't go to the motherboard, it goes probably here but I'm not convinced because: the antenna connector for wireless is present on the back of the motherboard, near the speaker connector and this PCB seems complete.

As I said, I would like to setup a Linux on it (and try to find if it's the OS or the NAND which is corrupted).

It seems there is not JTAG present, so flashing have to be done through the running OS.